During a business trip Jesper had the great pleasure of first doing a 13k run around the great Imperial Palace on Tuesday May 13th after the more  than 10 hours long flight.  The area around the Palace garden is very popular for runners as it is around 5 k per one round. After the run Jesper ask some other Japanese runners for a photo and immediately it was accepted. 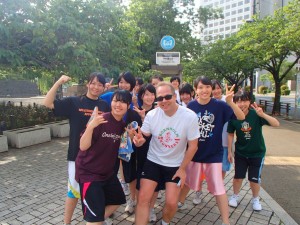 Tokyo is an exiting city, a lot of people but anyway extremely clean and well organized.

People are so friendly and helpful so the issue with difficult to perhaps speak together is easily solved.

Later on Sunday May 18th  Jesper was invited for a training run at Adidas Running Station with Takahashi-san or just Shin as he is called by his foreign friends.

Jesper (and Greta) meet Shin at Bagan Temple Marathon in Myanmar in November 2013 and it was an optimal chance to see each other again now when Jesper visited Tokyo for business.

07.30 a Sunday breakfast together at the hotel. Then with Metro to the place where one of several Adidas Runbases were situated. Here was good conditions for changing cloths and for only one USD it was possible to borrow and hereby try a pair of Adidas new running shoes.  After changing cloths it was time for — warming up! It was both warming up as well as muscle training so after 30 minutes the 14 runners were already tired. After a short run we reached the Akasaka Palace area where we ran 2 rounds of each 3,3 km. Very nice route with some minor hills and narrow passages. After the run it was time for stretching out and a group picture. Shin explained the other runners about the idea of Bornholm Runners and how we try to help children suffering from various serious illnesses.

A great Sunday morning with some very nice company and especially Jesper is glad for the invitation from Shin – just another example what running for fun can bring — friendships from all over the world! 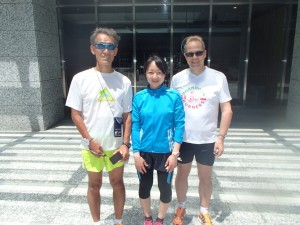 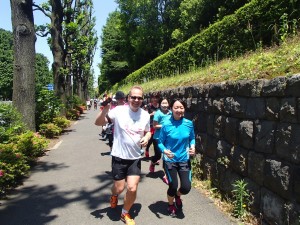 Filed under: Japan
← Previous Next →