It was this year’s first summer-day according to the calendar, when Kim and 9 other male runners plus 5 female runners had found their way to the beautiful forest „Almindingen” in the heart of Bornholm. The route consisting of 2 laps of 21 km each was fairly hilly and the ground was mostly gravel paths, inside variable types of forests. The weather was sunny with a calm wind and the temperature was just above 20 degrees Celsius – perfect conditions to run a marathon.

Kim’s only declared goal before the race was not to walk any of the 42,2 km; only to stop to by the hydration stations and then keep running. To avoid hitting the infamous runner’s wall he had placed a 60 ml energy gel (that was well tested in training) at each station. 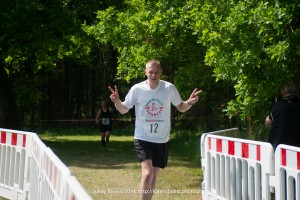 Everything went according to plan and it was only after 30 km the pace was beginning to be a little slower, but he kept it going and finally missed the meeting with the wall. Kim finished 4th out of 10 male runners in the time 4h:00m:23s which was an impressive improvement of 42 minutes compared to his first marathon.

Kim’s next challenge will be the „Sunrise Marathon” on the east-coast of Bornholm in the early morning on the 29th of June.

Filed under: BORNHOLM, DENMARK
← Previous Next →