admin 8 maja 2014 Respond
After the IAAF World Half Marathon Championship in Copenhagen where I prepared myself for more than six months and still not run up to the expectations, partly because pace makers ran too fast from the start and partly because of the tension in the body (even thou I finished in a decent time), I would try the same tactic, only four weeks later in the Cross Island ½ Marathon on Bornholm with exactly 100 participants.
The route runs across the island of Bornholm from the art museum in Rø to Rønne stadium north, of the beautiful scenery on the now disused railway line. The route was downhill most of the way (75 meters) except second kilometer where it runs up from „Døndalen”, the sun shined from a cloudless sky and there was a nice back wind all the way, better conditions could not be wished for.
After only 5 kilometers my feet began to hurt and my thought was: oh, there is much to be done, but strangely I was feeling good again after 10 kilometers, and everything went according to the plan until there were 2 kilometers to the finish line, where my legs became really heavy, and those which I had run with most of the way, pulled away from me, but I dragged myself through the last few kilometers and crossed the finish line with a personal best time at the half marathon distance 1 hour 41 minutes and number 18 out of 67 men.
A lovely Easter Sunday on the island in the Baltic Sea, I think I will return next year. Thanks to Kenneth Jensen from Viking Athletic for taking pictures. 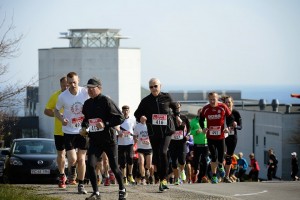 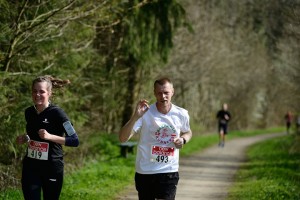