On June 5th 2016 Jesper ran the Christchurch marathon in New Zealand. This was his 5th continent in the project to become member of 7th Continent Marathon Club before end of 2016.

The run was back with start in city centre of Christchurch after the area has been closed for rebuilding after the two big earchquakes in 2011 and 2012 which more or less destroyed most of the city.

It was therefore a special experience to run between the empty areas where once families lived and now the area is still waiting to be rebuilt.

The race was done as: 10 km, half marathon, full marathon, 10 km walk and half marathon walk with start at the same time Sunday morning at 8.00 am. At that time the temperature had just moved over 0 C

The marathon runners first ran with the 10 km runners and continued then with half marathon for after some kilometre taking an extra slope out in the fantastic nice Christchurch landscape and coming back to half marathon route for going almost to the finish line and then have an extra slope bringing the total up to the 42.195 meter.

Even it was cold it was a great morning and many people came out with their coffee and supported the runners. Even a Scottish band were supporting several places during the marathon route.

Jesper made his 12th marathon in 3rd best time and in fact have not run faster since his mid twenties. Net time was 4 hours 42 minutes and 15 seconds.

As mention this run is part of the Seven Marathon Project – a project where Jesper will end the Seven Continent by running Antartic Ice Marathon on November 24th together with Signe from Denmark. For this project has been established a fund raising program to support seriously ill children. If you would like to donate money directly to the poor children and their families please contact Jesper by using contact at this webpage. 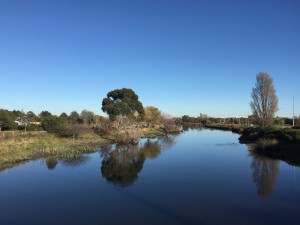 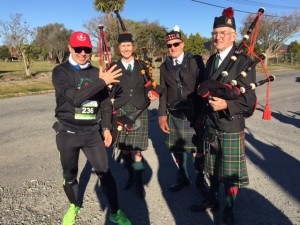