Jespers visited  Sandra and Michal in Switzerland and before he had signed in for the Harmony Geneva Half Marathon.

It was originally seen as a training event for the soon coming Christchurch marathon. However during the preparation before start he started talking with Caroline Donetti from Geneva. She was going to run her first half marathon and would like to finish in less than two hours. Jesper and Caroline agreed to try running together.

Even more than 5500 runners participated Caroline and Jesper found each other after start and were running together for almost 18 kilometer. At that time Caroline got a little tired and Jesper at the same time realized that he was running towards a new personal best – and more important in a time where he could perhaps beat his nephews Caspers time from Gdynia March 20th!

Giving all – and even getting the full support from Sandra and Michal in the finish area – Jesper made his new personal best 1 hour 57 minutes and 32 secs. but still some 50 seconds behind Caspers time. The „family competition” is continuing 🙂

Caroline has – after finishing her first half marathon in just over 2 hours- joined Bornholm Runners. Together with Sandra and Michal there is now 3 members living in Switzerland. Hopefully we will hear news from common run from this part of Europe in the nearest future.

Geneva Half marathon (and also the full marathon arranged the same day) is well organized and the route goes via some of the nicest landscape you can imagine. The last kilometers in the city center is amazing. During most of the route people are standing and supporting the runners – highly recommended!!

Jesper will now focus on getting ready for the full marathon on June 5th and hereby his 5th continent marathon. Soon will be sent out fund raising material to companies in Poland and Denmark with the aim to support kids suffering from seriously illness 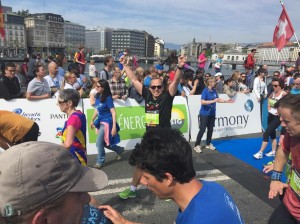 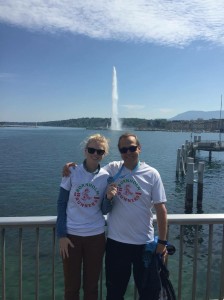 Filed under: Switzerland
← Previous Next →