Mariola and Marek participated in the Santa Half Marathon, Torun on December 8th 2013.

The weather up to the run was terrible with heavy snow and storm. Therefore the day before it was decided not to drive to Torun and risk standing on the roads the entire Sunday.

Sunday morning the wind was gone and even sun showed up. Mariola and Marek made an early morning decision and went to Torun. Here they among other Santas made the half marathon on slippery roads in city but mostly in forrest. 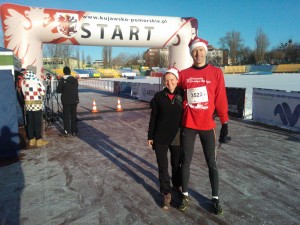 Filed under: POLAND and Tagged: Santa Half Marathon, Torun
← Previous Next →