The Bornholm Runners team got the surprise at the third shift where the press from local Newspaper Bornholms Tidende was waiting and took pictures of the entire team and talked with Jesper. Monday 1/3 of a page in the newspaper informed about the team from Poland/Bornholm and the fact that by running this event they generated a donation of PLN 10,000 from JS Hamilton, Gdynia.

The donation will be paid directly to the children hospice in Gdynia as part of the aim of Bornholm Runners.

The fact that three out of the four runners originally comes from Bornholm makes this run as very special. Also the support by family members during the entire day made the running team extra happy and made the 100 km easier to overcome.

No doubts that from the team (who by the way ended on a nice 2nd place out of 5 mix teams) would highly recommend other runners to participate in the event in 2014. Bornholm is simply one of the most fantastic places to run and at the same time enjoy the amazing 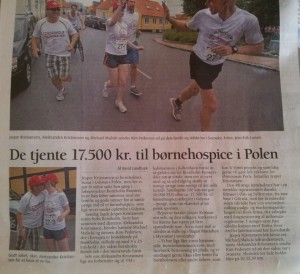 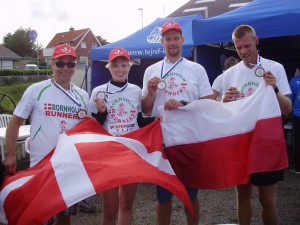